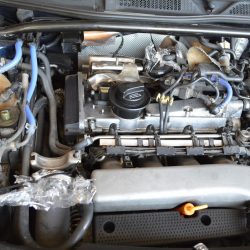 After 3 years of ownership, finally had to do some real work on the TT, and when it rains, it pours — but more on that later. This Audi TT has one of the VW/Audi 1.8T variants, which means it uses a timing belt, and the replacement interval on these has dropped due to premature failure of the timing belt over the years. If the belt goes, so goes your engine — with bent valves at the very minimum. The manual states that it should be replaced every 105,000 miles, whereas the common knowledge now is 60-70k. I have no idea when it was done last, but if I’m going to do anything fun in the car, should probably take care of this.

The nice thing about owning a 15 year old car is that everything’s been done already by someone else, so I followed the excellent Timing Belt replacement guide by BlueTTop on the AudiWorld forum. I used the ECS Timing Belt kit with the Gates belt, and picked up a new Coolant Expansion Tank as mine was yellowed, and one 4-pin connector to replace a cracked housing on my 1st cylinder coil pack. Total replaced on the car included the aforementioned connector and coolant expansion tank, as well as the timing belt, accessory belt, tensioning pulley, tensioning dampener, water pump, and thermostat. For good measure, I also did an oil change.

I won’t go through every step of what I did, as the guide above did it far better than I, but just to highlight a few things…

Honestly, this was a lot of fun. It’s a 1-2 day job that took me about a month in between job and kids and time with family, but it was nice to just work on one piece at a time, especially when I needed something calming. There were frustrating parts — bolts that were nearly impossible to get to (hello, bottom thermostat housing bolt), missing tools (bought a torque wrench that only went up to 30 lb ft, while the engine needs 33 and 40, and the wheels need 89), things that didn’t make sense (is that supposed to spin or no?). There were also fantastic parts, like when the timing belt finally went on, every TDC mark lined up, and after a few spins, still lined up.

The test drive after went well, except for not putting quite enough coolant in. A new problem cropped up, though. On one of my drives, all of this lit up:

ABS, Brake, ESP, and Alternator. Not a good sign. VAG-COM doesn’t help me, as I have another persistent K1 Short to Ground issue that pulling fuses is not helping me track down. Battery is putting out 12.5, but testing the alternator gave me over 16V. I guess there’s the problem. Either it’s the voltage regulator on the alternator, or something else in the alternator, or both… Next up, replace the alternator!