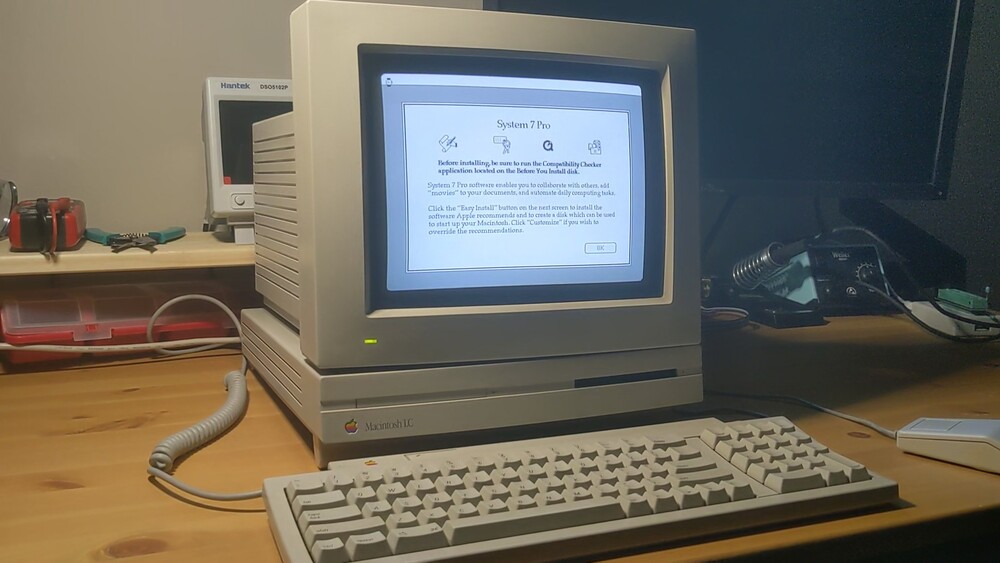 The Macintosh LC was a mid-range computer released in 1990, as part of a trio of new Macs (including the Classic and IIsi) allowing Apple to target a more cost-sensitive user. At $2,499, it was the lowest cost colour Macintosh released at that time. It was hobbled intentionally by Apple from the getgo. While the 32 bit 16 MHz 68020 wasn’t necessarily a bad processor, Apple saddled it with a 16 bit data path, didn’t provide a way to add a FPU, and limited the maximum RAM to 10mb. To add insult to injury for a wistful retro enthusiast, the LC was the last nail in the coffin for the somewhat more interesting IIgs.

Nevertheless, this was a machine I wanted so badly at launch. I had a Macintosh 512Ke at the time, and the idea of having a colour Macintosh for what appeared to be a reasonable price was really alluring. By 1990, a black and white Macintosh with 512k of RAM and a 68000 was already losing usefulness. Unfortunately, it was only a reasonable price compared to other Macs, and it just wasn’t in the cards for me. My school got a couple, though, and I was able to play with some great applications while there.

I picked up this particular machine from a local computer reseller. It was obviously turned in, but far too old for this particular retailer to reasonably sell. I found it on Facebook for a price I was comfortable with and brought it home. The machine was in pretty great condition, inside and out — no major damage, no obvious leakage anywhere. Booting it up for the first time gave me a display, but a flashing question mark and a grating squealing noise. There was absolutely a hard disk in there, but maybe it had been wiped, or maybe it was the source of the noise. I inserted a System 7 floppy, and it brought me to a desktop. Drive Setup didn’t see anything on the SCSI bus and the sound was driving me nuts, off it went again.

I opened up the LC again. I first assumed that something was going on the power supply to make the squealing noise, but the power supply was quiet. The hard disk was spinning up on boot, but I couldn’t hear it seek at all. The squeal was louder, though, but it turned out to be coming from the speaker. Oh, right, we’re in the 1990s now, and these are surface mount capacitors. I wondered a little if the capacitors had anything to do with SCSI being functional. A quick browse to Console5 to order a new cap kit, and I wrapped up the machine to work on later.

Capacitors in hand, I opened up the machine and removed the board. The LC uses captive plastic brackets to mount the board to the case, so it’s incredibly easy to remove. There are 17 capacitors on the board, all sitting near some melty plastic, but this was pretty easy compared to the Amigas. I have been using the controversial twist and remove method to get rid of the caps, used braid to remove the remainder of legs and solder from the board, and replaced each with their appropriate cap. I then rinsed the board with flux remover and alcohol to get rid of the soldering debris as well as the left over capacitor “juice”, and reassembled. The machine turned on, and the squeal was gone. Unfortunately, still no disk.

Doing some web searches on old Macs and their disks, turns out that old SCSI drives — Quantums in particular — had a tendency to have their heads stick to the bumpers on either side of the platters. Figuring I had literally nothing to lose by trying, I removed the cover of the hard disk and found that no obvious damage was there, but the head was not planted up against a bumper. I powered it on while open, and the head simply would not move. For grins, I put a shim around the rubber bumpers on either side, even though they didn’t feel sticky or tacky. I then powered it on again and started lightly tapping on the head until it started seeking… and the Mac started booting. I immediately powered down. I added a little bit of oil to the head and reassembled the disk. One last power up, and it boots! Before buttoning up the machine, I replaced the PRAM battery with something from this decade, and added 2 4mb SIMMs for a total of the maximum allowed 10mb of RAM.

The disk itself had System 6.0.8 and a wide variety of personal documents and kid projects dating up to 2001, which is a heck of a run for a 4mb 68020 Macintosh. I took the opportunity to make some System 7.1 floppies, wipe the drive, and create something close to period correct. With the keyboard and mouse already in working order, that was about it, this Macintosh LC lives to be admired for another day. As a future to do, I am very likely to replace the hard disk. That head is probably going to stick again, and those platters looked absolutely terrible. It’d be fun to increase the VRAM on the machine as well, if something reasonable comes along. Even better if I could find a IIe card for the PDS connector, but I don’t think a reasonable one will come along…