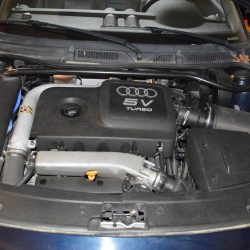 A little over a year ago, I decided it’d be neat to replace the intake on the TT, and while research brought me to the Modshack VTDA, they didn’t sell it anymore. I did find a K&N unit for a price I could afford, and made the switch. It completely replaced the stock airbox with a cone filter, a mini breather filter, and a big holder for the whole unit. It looked great, and sounded pretty awesome (extra woosh is better woosh), but there were two problems. First, it exacerbated a random CEL I was experiencing, and on longer trips, the wooshing got annoying, as I’m old.

Fast forward to today, and someone was selling a used VTDA on quattroworld.com. I jumped on it, and he shipped it super quickly. In a box, I got the VTDA… cylinder with a K&N filter inside, a mini breather filter, and some packing material. Browsed Google a bit until I found someone else who had installed it, and did the installation. Since the airbox already came out in the K&N install, the installation took me about 15 minutes, including a quick clean of the MAF sensor and devane of the MAF.

I’m super happy with how it looks, though the whole engine bay could use a cleaning, along with the VTDA. The best part, though, was the drive. It gave me the same level of breathing as the K&N did, but the sensor clean seems to have resolved my CEL and my hesitation, and the sound is still gently enhanced, but muffled a bit more so it’s not in my face when the top is down.
Highly recommended easy modification.
—
In the meantime, I never really finished project Audi Audio on the above, though I did take pictures. I may create a summary post, may not. Nevertheless, when I did the installation originally, I installed two amps to drive the speakers and the 8″ subwoofer. The sub was driven by an Alpine MRV-T320, and the speakers were driven by an Alpine MRP-F300. They both provided ample power for the installation, but I was always bothered by having two amps throwing off heat in the cramped shelf of a trunk of a roadster. I replaced those two with a Precision Power P900.5 five channel amplifier this weekend, and what a great replacement. The sound quality is great, the unit is super compact but still throws out the power I need, and it doesn’t give off more heat than one single of those Alpine amps.
I’ve also been working on cutting and moving things to make the TT head unit a double DIN unit. I started with a Nexus 7 install, but got frustrated with how finicky it was in terms of powering on and resetting, so I grabbed one of those inexpensive Chinese Android-based head units, since I have to custom cut anyway. I’ve completed the wiring, and cut the radio frame appropriately so that it’s mounted, stays there, and works well. I’m in the process now of altering the bezel to make it look like it belongs, and I’ll post progress there later.