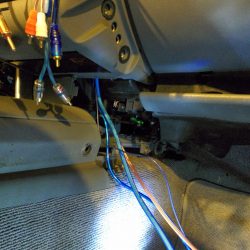 I always felt that the head unit was the easiest component of most vehicles to replace. Modern vehicles have hugely custom setups, some controlling HVAC and car preferences, which makes it a pain. Luckily, in this case, the only sin is that Audi uses a slightly wider faceplate on their head units. I actually replaced my head unit last fall as the original Concert unit was failing, so there’s going to be some stuff from memory here. I grabbed parts as required for the first installation, however, since I’m bypassing the Bose amplifier now, it’s possible that we can go for a cheaper wiring harness.

I had to modify the wiring harness before as the pinouts didn’t match what the TT was bringing out at all. The yellow power lead didn’t connect to anything, and it required me to pull pins out and replace them elsewhere. For this install, I yanked everything else out. So, you’ll only need the black harness, providing power, as everything else is for either audio output or the amp remote wire, which isn’t necessary, as I’m disconnecting the Bose amp. To be clear: You’re getting constant 12V power via the yellow line, and ground via the black line. Switched power has to be tapped.

To tap switched power, I went under the driver’s side again, and ran a wire from the 30X terminal on the far left side of the power bar directly under the steering wheel. It does what it needs to do — it’s on when the key is on, it’s off when the key is off, and it provides 12V. I wouldn’t power anything more intense than a head unit off that line, but it works really well for this purpose.